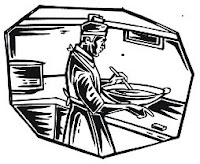 Dreamland Café Hearts exist because of me. I hadn’t known I was going to be the one who put them on the menu. I might have been more careful; might have not just gotten on the road in the black of that long-ago night when I first set out for Dreamland, Texas. In a hurry to be of help, I had no idea I’d be the one to do what Aunt Ellie couldn’t.

“Just take a right,” the man told me when I first pulled in to Hackley unsure about which road to take next. I  left my map at the last gas station, some 40 miles back. I could’ve called my aunt for directions, but I didn’t want her to think I was lost. She already worried about me wasn’t supposed to be part of the plan.

When the man leaned in through the car window to tell me to turn right – not left – at the next stop light, I got the creeps. Staring into his unkempt black beard, I knew there was no way I was going to follow his advice; he was probably making it up. At the intersection, I turned left.

An hour later I was back in Hackley, more than ready to take that right. Nervous about taking too long to get to Dreamland, about not getting there soon enough, I tried to laugh off the mistake. “That’s life” I imagined myself saying to Aunt Ellie when at last I pulled up into the Dreamland Café parking lot. I repeated the phrase several times, each time imagining the quick nod of her head. It comforted me.  So did the sign: Welcome to Dreamland.

“When you get into town, just ask anyone where the café is. I’ll be there waiting,” she promised.

It's been a few years since I’ve seen her. With a buzz cut if light purple colored hair and a diamond stud in my nose, I wondered what she’d think. Maybe it wouldn’t surprise her. She knew that like her I didn’t follow the rules. That’s why she married Uncle Adler. She was supposed to marry someone her own age, not a man 20 years older who loved cooking breakfast.

I no longer looked like the little Goldilocks she used to tell me I was. God, how I loved her visits. Every morning I’d wake to her humming in our kitchen. She made her crazy Dreamland griddle cakes stretched out thin and powdered with sugar to look like snowflakes. Arranged just so on my plate, they melted in my mouth.

The only one of mom’s three sisters who knew how to relax and take it easy, she was a lot of fun. We’d stay up late at night and tell each other secrets while my mom cleaned the kitchen then went to bed.

“I’d always liked the good-looking ones with fast cars,” she'd  lower her voice. Those words made more sense to me than my mom’s “Be careful and say no.”

I always hated to see her go.

“Can’t stay, honey. Got to make sure your uncle doesn’t burn the café down,” she’d say with a wink. Truth was she was crazy about Uncle Adler. Nothing like the boys she dated, he had a quiet ease she didn’t want to be away from for more than just a short while. “When you’re older come out and stay with us.”

I did just that the summer before my last year of high school. I jumped into my car as soon as I could after hearing that Uncle Adler  died. He’d been in an accident while on his way to pick up a new refrigeration unit for the café. Didn’t see the other car had crossed the line until it was too late. Late night phone calls to our house and whispers between my mom and my other aunts told me that the death was hard on Aunt Ellie. “Maybe too hard,” my mom muttered more than once. “She’s not eating or sleeping. If she’s not careful, she’ll lose the café and then what?”

When I finally got into town, I asked again for directions. This time, though, I asked a woman standing outside the post office. She said it was an easy place to find and she was right. From the parking lot, I could see Aunt Ellie through the kitchen window. She was cooking griddle cakes.

“I make them in almost any shape,” she explained after giving me a stack of pancakes that looked like flying saucers. She’d become a griddle cake artist of sorts and was knee-deep in special-orders. People wanted them for birthdays, anniversaries, baptisms, and high school graduations. But there was only one shape she said she wouldn’t ever make again. Heart was Uncle Adler’s favorite.

If someone asked her for that shape, she shake her head, take a deep sigh and say, “I can’t do that.”

I helped wherever I could. I mixed the batter and wiped down the cast iron griddle between orders which were always flying in. At night, we were so exhausted we didn’t talk the way we used to when she’d visit. Even though I’d tell jokes, she wouldn’t laugh. And when I asked her to tell me a secret from high school, she said she couldn’t remember any.  She cried and I sat there quietly. I know she liked my company because she told me she slept better with me there.

After a few weeks, she asked me to cook simple silver dollar circles. She layered three of them with fresh fruit and cream as a birthday dessert for diners.  Then she let me try my hand with more difficult shapes; ones that built into edible castles. We were becoming a great team.

One night after watching her glue griddle cakes with jam, butter or honey and toothpicks, I casually asked if I could try my hand at making a heart. She looked the other way as I stumbled over the words. In the silence, I marched over to the griddle and carefully poured enough batter for one small heart. It was lumpy. I asked what I should do to stop it from cooking unevenly. She hummed a silly tune and went out to check on café guests. I tried cooking one after another but couldn’t stop them from falling apart when I tried to turn them over.

Aunt Elle walked back into the kitchen, looked at my batter-streaked face and at the heap of pancake pieces at my side and laughed.  “If you’re flipping ‘em, you might as well flip ‘em the right way,” she walked up to the stove and held out her wrist. “Like this.”  I followed her instructions and eventually could cook plump golden-brown hearts that didn’t lose their shape. On the anniversary of my hundredth perfect one, she agreed to add that shape to the menu if I was the one to cook it.

I’ve been making heart griddle cakes ever since. And she’s been making store front pancake sculptures that get lots of attention. Her favorite one – her Leaning Adler Tower of Buckwheat – took days to make. A vacationing food magazine editor took photographs of it for his national magazine. The coverage brought more people to the café. She’s hired more servers and has more time now to be creative.

I finished my last year of high school in Dreamland and promised my mom that after that I’d take night classes at the community college.  I enrolled in an art class where I create griddle-cake designs for Aunt Ellie. She loves to try them out at night while we talk in the kitchen after everyone’s left.

I hope one of these days she’ll try building something with griddle cake hearts.

Griddle cakes, also known as pancakes, hot cakes and Johnny cakes are thin, flat, round cakes prepared from a batter, and cooked on a hot griddle or in a frying pan. Historical evidence suggests that varieties of pancakes were probably the earliest and most widespread types of cereal food eaten in prehistoric societies. Dried seed flours mixed with the available liquids like milk and eggs were baked on hot stones or in shallow earthenware pots over an open fire to make a nutritious meal. There are many varieties.

Here are a few:


= Netherlands’ pannenkoeken are eaten at dinnertime. The egg-based batter can be filled with sliced apples, cheese, ham, bacon, candied ginger and molasses.

= Yaniqueques or yanikeke are a Dominican Republic corn flour version. This fried bread is a popular beach food.

= A flapjack is a thick small pancake, served in a stack with syrup and butter. The word flapjack refers to a flat tart or pan-cake.

= Mexican hotcakes are often made with cornmeal — as well as, or instead of wheat flour. Popular breakfast items they are often sold by street vendors in cities and during local celebrations. Hotcakes are topped with different sauces such as condensed milk, fruit jam or cajeta (a sweet goat milk spread).

= In India, this hand held treat known as Pooda can be made either sweet or salty.
֍